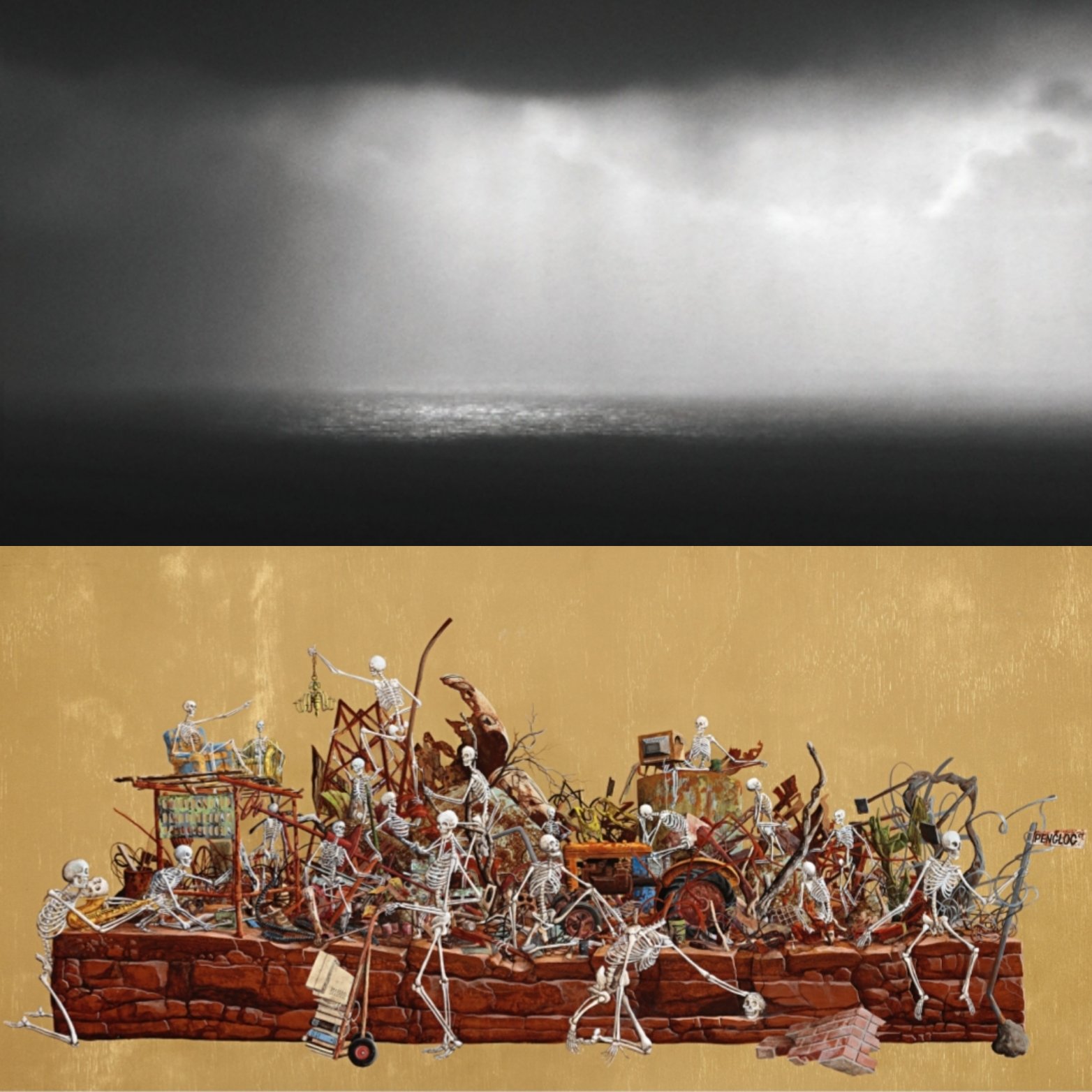 On November 1st Lionsharecords released This World, the new album by a brand new cooperative group featuring myself and Sydney maestros Mike Nock, Jonathan Zwartz and Hamish Stuart. We’re all really happy with the way this turned out and it’s been getting some wonderful feedback so far. It’s included in the ‘Rhythms reviewers’ list of Best 10 Releases of 2019’ and shot to #1 on Birdland Records’ 2019 Best Seller list within just three weeks of its official release! We’ll be playing some East Coast shows in February and have some exciting plans for 2020.

The official release date for the long overdue STOCK debut is January 31st 2020, but we’ll be shipping out LPs on December 13th and CD’s a few days after that. Anybody who buys a digital copy before the official launch date will be sent a download code within a few hours of purchase. (12/12/19 EDIT: LPs have been sent out today and download codes have been provided to all those who purchased a digital only copy)

Thanks to everyone who has bought a copy of both these albums, either through Bandcamp or in a good old fashioned brick and mortar store like Birdland or Readings. The pre-order support has really blown me away – especially considering the fact that I’ve stubbornly refused to engage with the 21st Century concept of courting “exposure” through streaming services – So, Bravo to YOU for finding and supporting it. THANKYOU. Sincerely!

I’m actually surprised by how many people have chosen to purchase the 24bit/96kHz download of This World. I personally think that option is exceptional value if you have the stereo system to do it justice.

STOCK features the label’s first 32bit download. And also our first LP  (I just picked up an advance copy and they look even better than I’d hoped.) The CD packaging is going to look amazing too. Tough choice! (Some people obviously haven’t been able to decide and have bought multiple copies in different formats, which really blows my small mind). Dale Cox’s art on this is EXCEPTIONAL. I’m still knocked out that he let us use these images – Thanks Dale; and Luke Fraser’s design work is as spectacular as ever. We can’t wait to get these in to your hands and eyes and ears.

Did I mention Craig and Chris and Hugh sound insanely good throughout the whole album? We’ve touched on this stuff live for many years, but the album is really the manifestation of the next step musically. I love it, and it couldn’t have been created with anyone else. I’m actually glad we waited this long.

Lachlan Carrick’s work from setting up the studio, to recording and co-producing, right through the mixing sessions and finally on to the mastering stage cannot go unrecognised either. He was a big part of getting the sound we were working towards and then pushing the envelope even further.

As of 12th December Northside and Natural Selection have LPs in stock. Northside added a nice post on their instagram page just hours after I dropped the records off  “JULIEN WILSON comes in late with an album that is great! It’s a deep journey into contemporary jazz via some beautiful art. Don’t buy it because @hooliok is one of the nicest players in jazz in Melbourne, buy this because it’s a trip to a place that’s inaccessible by walking. It’s transcendental!!!”

I have a couple of cheeky gigs left in 2019. Looking forward to sharing the music with you live in 2020

Here are some words people have shared about This World so far:

“While the results of the two-day session are testament to their compositional skills, it is their tasteful interplay that remains with you. The album is a thing of soulful beauty, with the composition coexisting in happy juxtaposition. An essential addition to any Jazz collection.” John Fenton, JazzLocal32

“my 2019 album of the year” Frank Presley – Northside Radio

“While something which does not reject or radically depart from its artistic precedents may not have the convulsive beauty of something radically unfamiliar, it can offer up pleasure which is steady and lasting. In its cadence and stylings, it has the feel of early to mid-sixties Wayne Shorter Blue Note dates mixed with a sort of ECM label vibe. To say that the ensemble is steeped in (modern) tradition would be to oversimplify the case. The past is not rejected but avoided is the effect of an old house with merely a new coat of paint. This album has staying power since there is no importance placed on shock of the new or gimmick/novelty. Everything unfolds with an organicness where emotion is not sacrificed for technique. It will be great fun to see what this ensemble offers up to the ears of listeners in the future.” Maxwell Chandler, Our Man on the Coast

“music that improves with each successive listen. Enjoying it multiple times as I have done didn’t result in a different experience, but rather it tightened my mind’s perception of this new quartet. This ensemble is all class. Highly recommended” Barry O’Sullivan, Jazz&Beyond

“What’s immediately striking is the sense of calm and spaciousness found at the heart of this music. There are no fireworks on display, nothing is hurried or rushed. Instead, there is an intense focus on mood, on emotion, with each instrumental voice striving for an intelligent and restrained clarity. With its laconic tempos and breezy tranquillity, it joins several other recent albums, such as Sam Anning’s Across a Field as Vast as One and Jonathan Zwartz’s The Remembering and Forgetting of the Air, that point to a distinctly Australian approach to jazz. In a nutshell, This World is a sublime album performed by a quartet of stellar improvisers.” Des Cowley, Rhythms

“Thanks for the copy of ‘This World’ which arrived here in NYC over the weekend. Congratulations on a tasteful release. I was quite struck by the extent to which the writing of the four principals seems to converge for the album – I had been certain that ‘Riverside’ was by Mike, for example – and it turns out it was your tune. I guess you guys have known one another and played together for a long time, but even so – it is striking to hear the extent to which you play with one voice. It certainly invests the group with an identity- and not just ‘Mike Nock music’ either.” Norman Meehan, NZ pianist, composer, author

“You will surely be unsurprised to know that Kathy and I both love This World…as, I suspect, would just about anyone lucky enough to hear it. It is also a prime example of why punters really ought invest in a high quality physical copy of such a recording, and then listen to it properly, through good speakers.” Doug Spencer, (ex) Producer of The Daily Planet with Lucky Oceans (ABC Radio National)

“I’ve just spent the best hour that I can recall having in a long, long time! I can’t say enough about the playing, compositions etc. Just the way you all fitted so well together sounds like a working band that has been together for a long time. I know that isn’t the case of course but boy, y’all certainly pulled it off!!!” Bob Bertles (Sydney Sax Legend)

“Music as prayer, hymn, dirge, paean; music of beauty and its contemplation, of recognition of its passing, and of the joy of play in its being. Music for this world, this brief and precious moment of light between the endless reaches of darkness. These four musicians are the dream quartet of Australian jazz. If you get just one Australian album this year, make it this.” Jazzozmentis

“This World is … fine contemporary spiritual jazz by some of our best musicians – the outstanding Australian album for this year. The landscape cover photo by Polly Ambermoon gives a sense of the music on offer here. This is beautiful, evocative music that conveys a sense of connection with and wonder at the vast Australian continent that we call home.” Sergio Morricone

“Although this band is a relatively new combo, each member’s experience shines through on this introspective and thoughtful album – with plenty of room for each soloist to make their mark. Some highlight numbers to keep an ear out for include Hamish Stuart’s ‘Any Heart,’ Wilson’s ‘Riverside’ and the title track, written by Jonathan Zwartz.” ABCJazz

“There’s nothing earth-shattering on this album, but that’s the secret of its charm” Eric Myers, The Australian