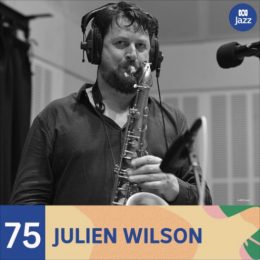 The ABC’s slightly controversial and mostly meaningless Top100 poll is done. (Meaningless in that it tried to cover all styles of international jazz over a 100 year period. But I guess meaningful in that it represented a massive selection of “wartime” swing bands, which may tell us something about the demographic and taste of ABCJazz’s audience – for those among us who use data mining metrics as a tool in our music creation recipes – For the record, there were nearly 30,000 votes).

Firstly, Thankyou to all the people who voted for my inclusion in this quite bizarre experiment. As Charlie Parker and Paul Desmond jokingly said in their interview with each other (which I posted online earlier today), “Modesty will get you nowhere”. I do deeply appreciate the love and support and am not here to piss in to a favourable wind.

Groucho Marx famously said “I don’t want to belong to any club that would accept me as one of its members.” I wouldn’t go that far, but I must say, any list of Australian jazz that includes me but not Jamie Oehlers or Stephen Magnusson is deeply flawed.

It’s great that the ABC run a 24 hour jazz station (even if it is only online on digital platforms). Any move to increase public awareness of improvised music must be commended, not condemned, in a country where the current climate involves a government who are actively trying to discourage our youth (and everyone else it seems) from embracing and pursuing the arts. (Humanities degrees up 113%!! Increased focus on more useful “job relevant” degrees! But Scotty form Marketing gave Scott Cam $347,000 to do actually, absolutely nothing, in a ridiculous role titled “National Careers Ambassador” which seemed to have even less details in its job description than the combination of Tony Abbott’s Role as Indigenous Affairs Envoy and Barnaby Joyce’s “Special Envoy for Drought” brainfart. Cam quit halfway in to his contract and returned half the money. Nobody really knows what the $175K he did receive bought us as a nation.

But I digress, back to the jazz. And in particular Aussie Jazz. I’m not a huge fan of lists, but perhaps if the ABC wants to pursue the concept, and enrich the general public of the variety and brilliance of our homegrown scene they could employ some musicians (ie: experts in the field) to compile a list of their top ten Aussie influences or inspirations, along with some relevant recordings. I guess this has been partly addressed through the most welcome “Monthly Artist in Residence” program in 2020, whereby top AusJazz musicians are asked to present a series of shows of their favourite recordings (including some of their own creations).

Following that excellent initiative, an extended proposal would be to hire a professional musician (or two) who has insider knowledge of the local scene through personal outstanding contribution to produce a series of TV shows on the local scene. We’ve had this before:

Beyond El Rocco – The movie, but even more importantly all the recording sessions of individual bands in a 45minute concert setting which comprised some of the core music. I believe these were aired once a week on SBS in the late 80s or early 90s. The recordings of Phil Treloar’s Feeling to Thought was a revelation when David Tolley played it for me in 1994

Let’s celebrate and promote our own. And enhance the profile of Australians who have made important contributions to our social fabric – or could if we could get a word in sideways through all the noise in the public domain. Let’s face it. We all already know that Benny Goodman and Tommy Dorsey were good in their heyday. I’ve played enough “Morning Melodies” concerts with big bands playing the music of Artie Shaw and Glenn Miller to audiences who are bussed in from retirement villages to revisit their glory days to realise that the nostalgic attraction for this music is not going to live for ever. Those of us who grew up with Pink Floyd and Rage Against The Machine and Nirvana and spent our 20s at ConFest and Rainbow Serpent aren’t exactly going to be pining for “Morning Melodies” concerts in decades to come. And yes, in case you’re wondering, this paragraph was colour coded for a reason. The Australia we live in is not the one our grandparents grew up in. And quite frankly, in many ways that’s an overwhelmingly positive thing.

For the record: When an OzJazz TV show budget is being prepared and numbers are being crunched, DON’T let the “artist budget” be the first “expendable item” to feel the sharp edge of the axe, due to producers and accountants claims that we’ll do it anyway because it will be “good exposure” and we should be “grateful for the experience”. We’re collectively and unanimously so sick of this shit. If an Arts show can afford to pay producers, a film crew, sound techs, gaffers, make up and hair, presenters, security, graphics designers, editors, gophers, cleaners and the people that make the coffee and sandwiches, then they can sure as hell pay the musicians who are front and centre too.

The creation of more jazz shows on radio (even if it is only digital) is a great thing. But we need HALF the presenters to be UNDER 40! And perhaps half of them to be under 30 to stay relevant. Look, don’t get me wrong. There are plenty of salt and pepperies who have exceptionally bold and adventurous taste in improvised music. But they are not the future. And we need to, to borrow some political jargon, INVEST IN THE FUTURE NOW

Don Burrows said to me a few years ago “I feel sorry for your generation. Because WE had TV. I was a household name. I was on the TV every week BEING ME, playing MY MUSIC. When I brought James Morrison on when he was 17 it made him. He could tour the whole country after that and fill rooms in Darwin and Broome, because people knew who he was and what he did because they’d seen him on the TV”

When I was at college at the VCA in the early 90s, if there wasn’t a gig on, we used to make sure we were in front of a TV at 10PM every week night to watch the Vizard show. WHY? So we could see Paul Grabowsky with Ian Chaplin, Doug DeVries, Andrew Gander, John Barrett, Bobby Venier and Gary Costello play with the special guest.

As a teenager I tuned in to Hey Hey it’s Saturday regularly, mostly for the chance to see Wilbur Wilde, who I had been introduced to on ABC’s Jazztrack when presenter Jim McLeod played his solo on Vince Jones’ version of Straighten up and Fly Right. Wilbur and Red Symons were already well known. But HeyHey made them legends.

Trying to catch a glimpse of your mates in the band on Dancing with the Stars or The Voice is not the same thing at all. Shit, sometimes they even use actors instead of the real musicians on The Voice! Even Play School is better. Much better actually. Where is OUR Sesame Street Australia???

In the spirit of spreading the love and increasing awareness for those of you who would like to expand your horizons or perhaps even venture outside your comfort zone, I’m going to list some names below (IN NO PARTICULAR ORDER) of Australian improvisers who I love, who WERE NOT on the ABCJazz Top100. (This is intended as a list attached to a letter though, not a long-winded introduction to a list.)

I’ll start by saying I would not play the way I do today without the influence of the following voices on the saxophone:

Nick Yates (the first sax I ever heard live)

Ian Chaplin – FFS!! What a sound

Elliott Dalgleish (there, I said it)

I am also deeply indebted to the following colleagues for their close musical friendship and for sharing the journey with me and pushing me to develop:

Andrea Keller, Sam Anning, Jonathan Zwartz and Barney McAll – I know they were on the ABC list but I can’t leave them off this one. James Greening too. And the omnipotent Paul Grabowksy of course)

Ruby Carter (Blessed mother to all)

The rest of the list will focus on musicians who are first and foremost BAND LEADERS (or bands) as opposed to just great individual players:

Lloyd Swanton – How did Lloyd not make it on the ABC list?

Anthony Pateras (not really a jazzer, but what an improvisor)

I have to stop. I could do this all day. I’m sure 100 more will pop in to my head while I’m cooking dinner. I guess the main point of making a list is how silly it is to make lists. Hopefully you didn’t get this far and you’re already off listening to some Australian music. Imagine what the list would look like if it wasn’t limited to “jazz” and bandleaders!?