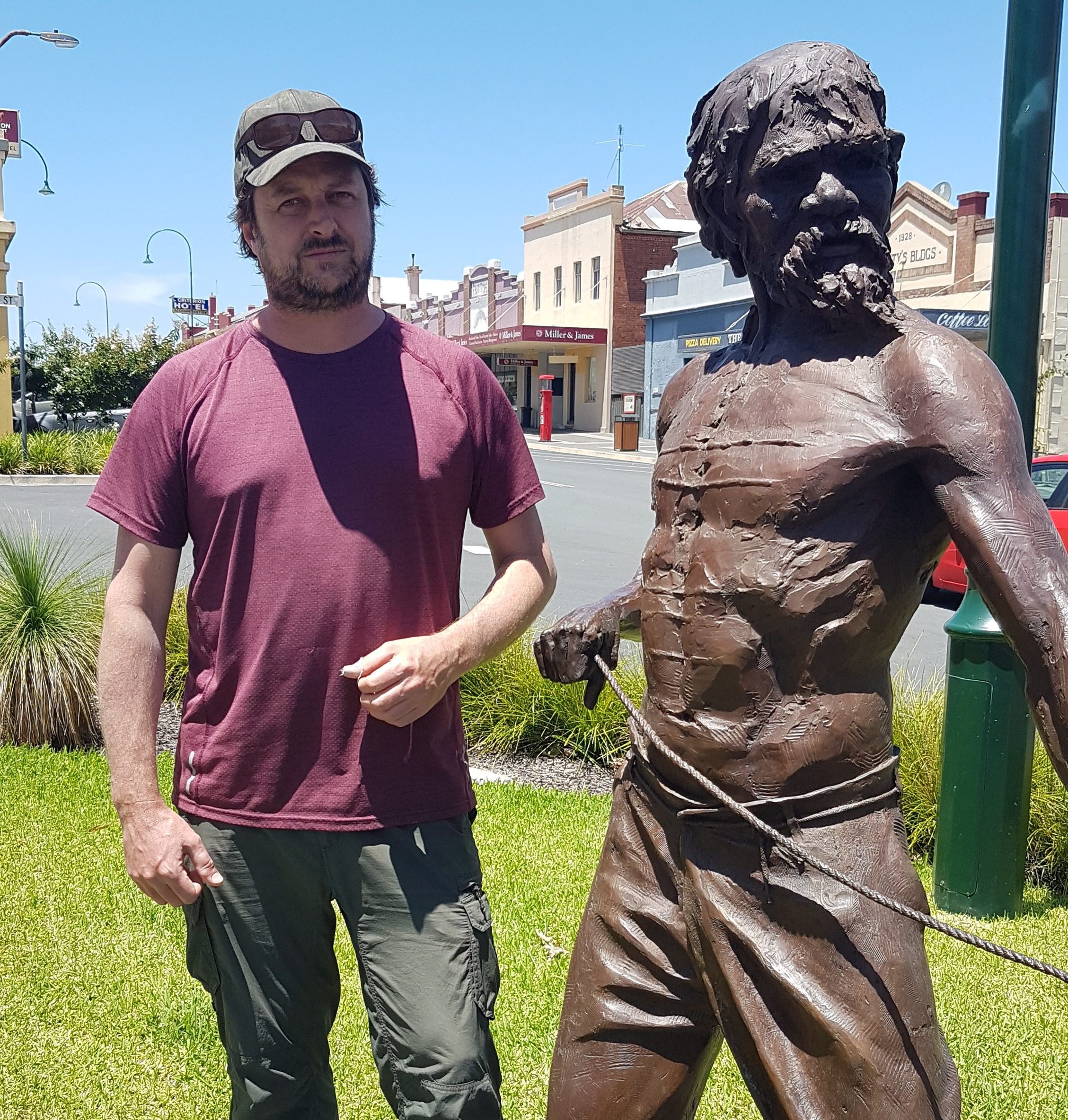 It’s been a while since there was any breaking news on this page. There’s been plenty going on though.

But first:
This is a picture of me with the statue of Wiradjuri legend Yarri in Gundagai. The statue was unveiled on the 165th anniversary of the Great Flood that almost wiped out the whole town. In 1852, 89 residents of a population of 250 died in the floods. Yarri and JackyJacky (and others) saved 69 people from drowning, with a bark canoe, in raging floods that saw the river swell to over a mile across at some points and carry away whole trees and houses. For their efforts they “were allowed to demand sixpences from all Gundagai residents”.

The Great Flood was one of the largest natural disasters in Australia’s history and inspired possibly our nations greatest act of selfless heroism! So why had I never heard of it until this year??? I actively search for this kind of history. Until 2017 this story was largely unknown outside of local Gundagai folklore. How many other unsung heroes have there been like this? Ned Kelly’s a national legend. Everybody knows who Don Bradman is. (What did he do? Hit a ball!)

In recognition of possibly Australia’s greatest hero I’m making this my main page photo for a while. I encourage EVERY Australian to investigate the stories of Yarri and JackyJacky. And the great Wiradjuri warrior, Windradyne. And the Bathurst War; and the Paramatta Treaty of 1827. And Pemulway. And Jandamarra. And Tunnerminnerwait and Maulboyheener. Dig these stories up and celebrate them by sharing them.

And of course, don’t ignore our present day heroes and current legends. Too many to mention

The quartet album, (Fermanis/Hale/Harvey) recorded last August with assistance from the Australia Council for the Arts is slowly taking shape. And a very wondrous shape it’s taking too. A watched kettle never boils. It won’t be out in the immediate future, but it’s getting closer.

I’m writing music for a new project with Mike Nock, Jonathan Zwartz and Hamish Stuart. We have our debut gig in Sydney in May and plan to record an LP

Reuben Lewis and I have started an electroacoustic improvised duo to delve deeper and explore the outer limits of our pedal obsessions. We’ve performed the first of 3 concerts at Lebowskis as part of their DEVRES project. We’ve also been playing together with YID!

New Melbourne locals, and old friends, Felix Bloxsom and Cameron Deyell and I have started a trio together. We’ve been throwing a lot of ideas on the pile, and some of them are sticking in wonderful ways. We’re continuing to record our adventures

Andrea Keller has invited me to share the stage in a variety of her awesome projects lately. Five Below. The Composers Collective. Various trios with Theo Carbo, Stephen Magnusson, James Mclean, Sam Anning… We’re playing a Transients show in April to celebrate the first in a series of Transient recordings that Andrea is releasing.

I have a season of shows coming up in May and June with Vince Jones and an exceptional band. It’s a kind of Nowtrospective

I’m doing a few gigs at the upcoming festivals. A re-imagining of Kind of Blue by Ross Irwin. Sam Anning’s Sexytet. YID!

The two “homage” bands I started last year featuring the music of Sidney Bechet and Dexter Gordon have more shows coming up soon. They’re both great fun. For listening. For dancing. For drinking. For catching up with friends. Generally just a good time.

Eamon Dilworth has been hiring me occasionally to play with Ed Keupper and The Aints. Last time I was in Sydney I recorded some tracks for his new album, Crawfish PoBoy. It’s being launched in Melbourne in June

I recorded with the incredible Danny Barwick late last year and the album is now out. It’s called The Tigers> DEFINITELY check it out. Amazing. Unique. Visionary!> In a sea of superlatives, there’s a word I NEVER use. But Danny’s music surpasses all it’s influences and comes out sounding like only itself

Oh Yeah: Barney McAll invited me to play on a track called Sweet Fresh Water for a compilation album. It’s super fresh, and sweet, and… WET. DRIPPING!!! I have no idea how to even find that shit,,,,, but hunt it down. He’s got eyes that see shit nobody else looks for too. You dig!?

Without Sweet Fresh Water….. everything else means nothing! That’s as political as I’m going to get here.

I wrote some music under that title and posted it on my Instagram a while back. It’s part of a solo album I’m slowly collating at home using solo woodwinds and effects/loops. It’s a process I’m really enjoying. It feels like painting

At the other end of the spectrum: January was BigBandMonth. I made two recordings with amazing contemporary Big Bands featuring all Australian compositions and/or arrangements. One with the Andrew Murray Big Band and one with the amazingly complex but just as amazingly beautiful music of Vanessa Perica. That was really exciting. Hard work, but so exhilarating. I hope they’ll both be out later this year.

Speaking of looking forward, Martha Marlow has an album brewing that is going to blow some minds

Oh shit. I nearly forgot. Barney and I made a recording last year with Mike Jordan of his own compositions… with us accompanying him while the drums play the melodies!!! It was my first recording session with my FX rig and I brought all the toys. Mike’s music is unlike anything else I’ve done. Heaps of room for improvisation. And lots of beautiful melodies that speak of the homeland. He told me last week that the mastering has just been completed. Can’t wait to sahre it with you all. It’s fresh AF

I’m teaching ensembles one day a week at VCA this year, in the same room that Simon Star (Professor YID! himself) and I had our first-year ensemble in with none other than Mike Jordan. I’m loving the cycle of life. (And I’m loving cycling to town along the Yarra Trail. Getting to know parts of Melbourne I never knew existed). The comaraderie at the schools is really special right now and there are some amazing fresh talented cats coming up

Los Cabrones just broke a long drought. And 12ToneDiamonds are about to make the rarest of rare appearances…. with Naomi Jean!!!!