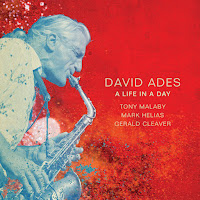 A Life In A Day was recorded on September 18, 2013. Three weeks later, alto saxophonist David Ades passed away, a victim to the lung cancer that he had been battling for nearly two years. Ades undoubtedly knew that any day could be his last, but he never allowed that knowledge to subdue him, to crush his spirits or pinch the glorious flow of notes that he’d been unleashing since he was 18. Recorded with saxophonist Tony Malaby, bassist Mark Helias, and drummer Gerald Cleaver, A Life In A Day is a testament to the transformative power of music – no, it might not be able to rid the body of disease or pluck us from the arduous situations in which we find ourselves, but it can lighten the load, lift us up, and give us hope. When listening to this recording, it’s clear that Ades dedicated himself to harnessing that power. During this session (as on uncountable others), he poured his heart and soul into his saxophone. Two years later, we’ve finally been given the chance to hear the wondrous sounds that were created that day.

The first time this group got together, we were given A Glorious Uncertainty. That album was an exuberant display of the tight rapport between the four players, but its title is perhaps even more apt for A Life In A Day. While the pieces on A Glorious Uncertainty could occasionally veer into boisterous, hard-driving territory, this album is relatively understated. The uncertainty here is in greater abundance – there’s an exploratory mood that manifests itself in gentler, more expressive playing. In other words, the tempest has been turned inwards, resulting in tunes that are more introspective. A lot of that is due to Cleaver: on the last effort, he roared out of the gate with rhythms that approximated rock in both tempo and style. Here, he tends to give more space to the two saxophonists, encircling their figures and melodies lightly, rolling along the outskirts. His percussion work has gotten more subtle, and it’s all the more effective for that reason.

The first piece, “Slow Song,” illustrates this more subdued approach perfectly: it begins with the Ades’ lilting, earnest melodies, the soft skittering of Cleaver, and Helias’ esoteric constructions (reminiscent of Jimmy Garrison’s work in Coltrane’s last quartet). Malaby stays out of the picture for the vast majority of the track, giving Ades time to engage in a fervid soliloquy. “Bark” is the first chance they have to truly stretch out and enjoy each other’s company, and it’s absolutely gorgeous – on the alto, Ades frequently swoops upwards to the higher registers, but he never abandons his warm, expressive tone. When listening to the labyrinthine webs that are often spun in improvisational jazz, I like to visualize, to picture the shapes being made. Taken with Malaby’s sonorous, more languid lines, the resulting image of these two players is that of a dalliance between birds. Perhaps Whitman can explain it better than I:

On “Removab,” everyone picks up the pace: Helias provides urgent, elastic bass-work, Cleaver pushes things forward with his quietly insistent rhythms, and the two saxophonists (particularly Malaby) reach for the stratosphere. Malaby opts for the soprano sax here, and the switch seems to thaw any inhibitions he might have; he’s never stuffy, but in this piece he’s downright irrepressible, overblowing, squeaking, honking, and generally squeezing every note out of his instrument like a thirsty man would squeeze water from a cactus.

A quick word on Mark Helias: he’s the heartbeat of this group. While Cleaver delimits the compositions and provides them with steady, electrical pulses, Helias pumps the blood. Malaby and Ades spend a great deal of time attempting to escape orbit, so his presence is doubly appreciated – he makes sure that the melodies’ muscles are still flexing, and his throbbing bass-lines are the roots that keep the whole affair grounded and stable (side note: the fact that I need to use mixed metaphors to describe this group is proof of how hard they are to pin down). Hear: “Blahh,” in which Helias’ strong, sinewy notes tumble over one another in a ceaseless march. I shudder to imagine him replaced with a more sluggish, sedate bassist – the others players would undoubtedly suffer for it. Helias is not always locked into the same routine, however. On “Arco and Alto,” he switches to (you guessed it) arco while Ades mans the (yep) alto. The title is a bit misleading, because Malaby pops up too, playing soprano. Without Cleaver, there’s a definite change-of-pace, a looser and more abstract feeling, but that haziness eventually resolves itself – Helias goes back to pizzicato, and the track comes to resemble the others more closely.

A Life In A Day is a group effort, of course, but you’d be excused for taking it as primarily a showcase of the unbridled energy and skill of the two saxophonists. That’s not to downplay the contributions of Helias and Cleaver –  these compositions would be incomplete without them – but it’s simply to point out just how incredible Ades and Malaby sound together. Even more incredible is the fact that, in these sessions, Ades was playing beneath the weight of his disease, beneath the weight of the knowledge that it could be his last-ever recording. When listening to these pieces, it certainly doesn’t sound that way. He sounds light as a feather. I suppose that’s the most important message to be gleaned from this album – that even the threat of non-existence can’t quell the joy and sense of freedom that music provides. In Ades’ spiralling streams of notes, you can truly hear a life. As the album’s title suggests, these sounds were performed and recorded in the span of a single day. However, it’s safe to say that that they will echo for much, much longer.