The band started as a jam band in Fitzroy playing the 11pm-3am Thursday night slot at a small, messy Johnston St bar. The band, like the bar, was often messy, but always energetic and fun and adventurous. The original line up of Julien with Tim Neal (B3 Hammond Organ), Novak Conrad (guitar) and Andy Swann (drums) evolved to include Steve Mags by the time of the first recording.

For the 2nd album Novak Conrad was back on guitar, contributing the beautiful composition Once Upon Whatever, Nick Sinclair was often playing electric bass in place of Tim’s Organ, and Will Guthrie was on drums. This was the start of a long musical brotherhood between Julien and Will where they literally played in a dozen or so original bands together during the next decade, culminating in the assumptions trio with Magnusson.

The original album sold out years ago, but some copies were found during a couple of house moves, and are available as collector items at bandcamp. Wide is still available through Jazzhead Records.

The band were featured on the TV Series “Access All Areas”.
Here are some screen shots some of my students found a couple of years ago!
“Nice haircut!” 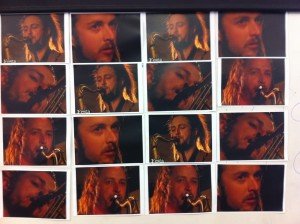