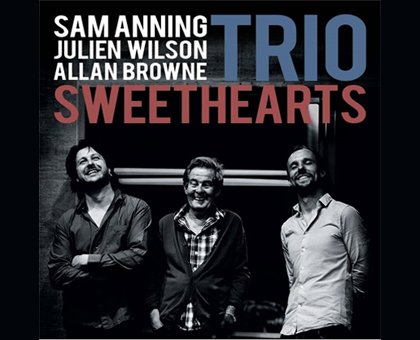 The Australian – Sept 7th 2013
EACH player in this trio is foremost in Australia on his instrument, although ex-Perth bassist Sam Anning has relocated to New York. Saxophonist Julien Wilson and drummer Allan Browne are long-term luminaries in Melbourne, where the album was recorded.

The 11 tracks are comprised of five pieces by Anning, one by Wilson and five well-selected standards. With the solo bass opening establishing a lyrical melody on track one, Anning’s Cactus Flower, two things are obvious: the beautiful resonance of the recorded instrument and the consummate artistry of its player.

Following that intro, shimmering cymbals preface the arrival of Wilson’s softly luscious tenor as Browne sketches an out-of- tempo mallets backdrop to produce a highly sensitive, beautiful ballad. The first of the standards, Little White Lies sets a swinging medium tempo from the start and as Wilson starts an absorbing, enmeshing solo and the bass walks to Browne’s impeccable beat, the effect is nearly transcendental.

Wilson plays clarinet on his composition Farewell, with a pretty melody and a south-of-the-border sound that he ornaments engagingly with assistance from a climactic bass solo. Soprano sax and bowed double bass provide a noteworthy opening to Anning’s Through the Open Window and the bass clarinet makes an effective reprise of Cactus Flower.

Wilson’s warm tenor tone brings a lazy, sunny mood to Billy Strayhorn’s Little Brown Book, gradually strengthening throughout, and the horn’s lower register is put to excellent effect in The Best Thing for You is Me, followed by very smart and fast solos by all three. A virtuosic trio collection using interestingly varied instrumentation.
John McBeath
****1/2

AustralianJazz.net – January 7th 2014
When musicians play for each other rather than for themselves (or, worse, to impress) the instruments have a way of melting together, just as multiple ingredients become one dish. You hear it from the opening notes on Sweethearts, an album that in many ways is a throwback, and yet which carries the timeless relevance of three players hell-bent on praying before the altar of music, rather than before the many craven idols that easily sidetrack improvising musicians.

I say ‘throwback’ because Sam Anning’s tunes and those he chooses to interpret are embedded in a jazz tradition that has precursors in all decades between the 1920s and now, with especially strong hints of the 1950s. But were this just another attempt to recycle some form of bop it probably would have barely merited a review. What makes it so much more interesting and notable is the way that ghosts and echoes of pre-bop jazz mingle with more recent approaches in a mood of striking conviviality.

Of course drummer Allan Browne has spent over half his marvellous career playing the perky stomps, struts, rags and blues of classic jazz, and infusing them a uniquely Brownian combination of wryness, poeticism and groove. Ever since he began operating in more contemporary idioms over 40 years ago the same qualities have been evident, albeit somewhat shaken and stirred, and with more scope for his profound gifts of applying delicacy of touch and introducing telling use of space to the music.

What may have been less obvious to some is the way that Julien Wilson also draws on this pre-bop heritage. To generalise outrageously there was a tendency for bebop to make the sounds of the instruments shrink, as agility became a shiny new deity in the music. Before bop pure sound was much more a musician’s signature: sounds that had the heft to surge over the vigour of a big band and to fill a room unamplified. And if you made sounds as big on a tenor saxophone as Coleman Hawkins and Ben Webster did you could afford to breathe a little; to leave some space and gather your thoughts while the vibrato of the last note lingered in the air like eye-contact between lovers. Wilson understands all this: understands that a single note played with a sound to make your hair curl is worth a thousand thin, reedy ones. His tenor carries the mass to make a tune feel better about the fact that it was ever penned. Just as importantly, he carries that attitude and weight across to his other instruments, and here he wheels out his soprano as well as his clarinet and bass clarinet. On all of them the tones are gorgeous, and the lines drip with joy and pathos and other emotions that remain wonderfully uncategorised.

Then there is the leader. Sam Anning, too, makes each note a statement, not in a look-at-me way, but so that he is constantly fortifying and invigorating the music. Like Wilson’s instruments his bass has a fatness of sound, and like Browne’s drums it has a suppleness in the enunciation of the grooves. Anning’s idea of groove is to make them deeper rather than burdening them with macho ferocity or bravura flourishes. His solos, meanwhile, echo and reiterate the traces of vulnerability that characterise the playing of his colleagues.

Anning took this recording with him to New York, where it was superlatively mixed and mastered by David Darlington. The bass is rich and thick without being overly prominent, the horns sing, and the drums nestle in the mix with the sweet touch that is such a hallmark of Browne when heard live. If you want to sample just one piece, try Wilson’s ‘Farewell’.
John Shand

JazzandBeyond.com.au – March 2014
Here is a trio that knows how to caress a tune but at times they press a little harder opening up no end of melodic explorations within a quasi retro context reminiscent sometimes of the late Paul Motian’s On Broadway sessions. Bassist Anning is joined by reedsman Julien Wilson and the omnipresent Allan Browne on drums. Anning contributes four originals amongst delightful memories by Walter Donaldson, Billy Strayhorn, Irving Berlin and Duke Ellington. Amongst the highlights is one of the pressing numbers by Anning ‘Princess Doug of Fitzroy’. Here Anning opens with a funky bass lick before Wilson states the melody on tenor, which is wonderfully spatial leaving plenty of room for the bass and Browne who simultaneously states the melody and the beat on the drums.Wilson’s tenor reaches further out within context before Anning contributes a fine solo. Elsewhere the disc’s dimensions are increased by Wilson’s soprano, clarinet and bass clarinet but it’s his beautiful Lester Young like tenor that shines often with sensually bent notes. No overdubs though, just solid heartfelt, spontaneous and glorious playing.
Peter Wockner
****

JazzwiseMagazine – May 2014
A reed led trio can be a daunting challenge over the course of a full length album, but happily the reverse is true here. This is an album full of sublime playing, gorgeous sounds and great arrangements. To compliment Anning’s luscious bass on this, his second album, he is joined by veteran master drummer Browne and the sensuous reeds of Wilson. This is understated playing, there are no brash solos or over the top performances, restraint is the key here and its works so well. Anning has selected a mix of originals, including the funky and intriguingly titled ”Princess Doug Of Fitzroy” together with some less known standards, for example, incisive treatments of Billy Strayhorn’s “Little Brown Book” and Ellington’s “Creole Rhapsody”. Wilson is the complete musician, the use of multi reeds gives the album a more varied feel no more evident than on the track that bookends the album. On the opening take of Anning’s “Cactus Flower” Wilson is on tenor but in the closing version, he displays his talents on bass clarinet. If there is a criticism, it’s that Browne is often back in the mix and on occasions his subtle percussive effects hard to discern, particularly on Wilson’s clarinet led “Farewell”. Nonetheless, this is a fine album from three excellent players.
Michael Prescott

Rhythms Magazine – December 2013
Bassist Sam Anning’s second album as leader came about by accident. He had been based in New York for a year or two when he returned last November for some gigs with NY-based vocalist Cyrille Aimee. A snag with his visa paperwork meant he had to delay his return to the States, and he filled the time by booking a recording session with saxophonist Julien Wilson and drummer Allan Browne.

Thankfully, Anning is a better musician than visa applicant. Sweethearts is one of the strongest local releases this year. The session is bookended by two brief, meditative version of an attractive original, ‘Cactus Flower’. Between them, the trio plays a few originals (three by Anning, one by Wilson), and some not-too-standard standards, including Billy Strayhorn’s ‘Little Brown Book’ and two by Irving Berlin, ‘The Best Thing For You’ and ‘Remember’.

This is a relaxed session, the three players obviously familiar and comfortable with each other’s approach. Wilson is eloquent on his usual tenor saxophone – his interpretation of the Strayhorn ballad is masterful – but also effective on the tracks where he switches to soprano sax, clarinet or bass clarinet. He is mostly in a restrained mood here, but there is still the occasional hint of urgency or fire in some of his flurries or exclamations. Anning takes several articulate solos, and elsewhere combines seamlessly with Browne in maintaining a flexible pulse.
Adrian Jackson