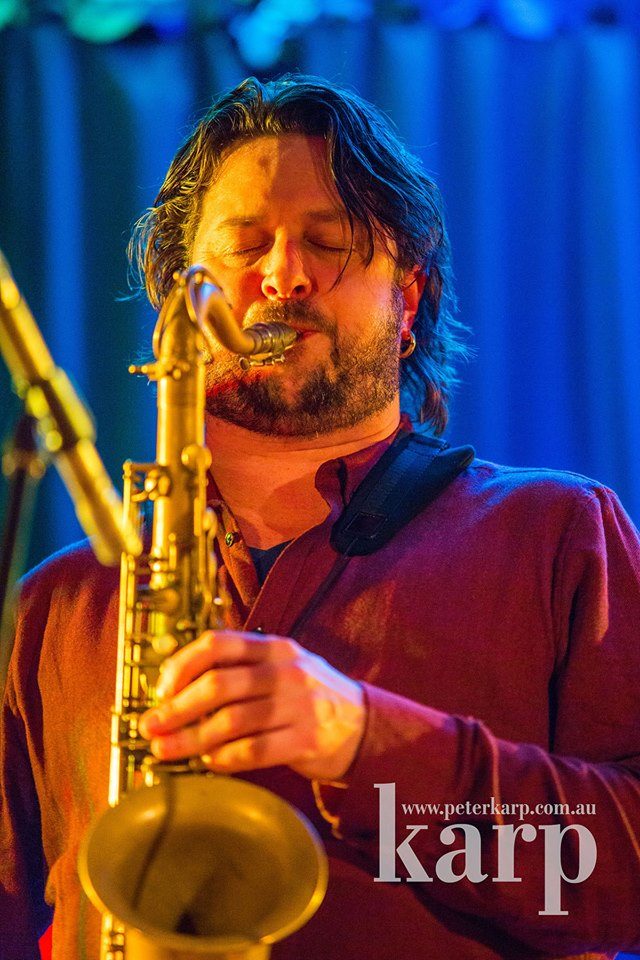 The tenor saxophone is so deeply embedded in jazz that the sound of Coleman Hawkins, Ben Webster or John Coltrane is like the music’s conscience. The recent rush of international artists through Sydney brought the profundity of Charles Lloyd’s tenor and the quicksilver of Joshua Redman’s. Then along comes Melbourne’s Julien Wilson, the spiritual heir to Australia’s ultimate tenor players: Merv Acheson and Mark Simmonds.

Wilson’s ‘This Is Always’ opus, which recently cleaned up at the Australian Jazz Awards, is his most conventional jazz album, played by a band drawn from Melbourne, New York and Sydney. Unfortunately health issues kept veteran drummer Alan Browne away, and Wilson opted for the polar-opposite Simon Barker.

Where Browne upholstered these songs in velvet Barker overlaid rhythmic puzzles and heightened drama. At first his wilder extravagances seemed an imposition when Wilson, pianist Barney McAll and bassist Jonathan Zwartz were all playing within the expected, accepted idiom. But as the concert progressed, and the more fascinating Barker’s conceptual challenges became, the more the band adjusted to his radically different, imaginative and periodically thrillingly primal input.

Sometimes Wilson played so gently that it was no more than breathing coloured by sound. A long melodic line would trail off so gradually that an outline of unheard notes seemed to haunt the air. On Ellington’s The Feeling of Jazz each note sprawled voluptuously from the horn, and on his Aberdeen Wilson built such tension that his tenor threatened to explode across the turbulence forged by the band.

Wine and Water had the saxophone subsiding into utter desolation following an introduction from Zwartz that was full of mystery, and yet unfolded as naturally as the seasons. McAll then reminded us that as well as being among the most rhythmically buoyant musicians Australia has produced he has an equally rare ability to create crystalline states of suspended animation.

Make no mistake: this band was just as exceptional and distinctive as Redman’s, and the tenor playing more so.

“Melbourne saxophonist Julien Wilson won three prizes at the Bell Awards last month, so expectations were high for his quartet — and they delivered mightily in one of the best performances of the festival. Wilson’s luscious, after-midnight toned tenor swung into Duke Ellington’s bluesy The Feeling of Jazz for a mood-setting opener. New York based pianist Barney McAll, bassist Jonathon Zwartz and drummer Allan Browne all fitted the genre perfectly: old school influences in an intelligent, modern context.” John McBeath, The Australian

“Wilson seemed genuinely delighted to have New York-based Barney McAll (piano) and locals Jonathan Zwartz (bass) and Allan Browne (drums) beside him on stage. This was a ballad-heavy set showcasing Wilson’s sublime saxophone tones. Heartfelt tributes to recently passed jazz identities Bernie McGann and Gil Askey were a noble gesture applauded fervently by the audience. Whether by stick, brush or hand, the much-loved Allan Browne was intent on being a team player, forever complementing his band members’ contributions. His impulsive calls of ‘yeah’, added real personality and warmth to the music. To end, Wilson swapped from saxophone to clarinet for ‘Farewell’, a beautiful and fitting ballad.” Greg Phillips, AustralianJazz.net

“The finish of this narrative is probably fairly obvious by now. Julien Wilson on clarinet and tenor sax joined Barney McAll (over from New York) on piano, Jonathan Zwartz on acoustic bass and Allan Browne on drums and cymbals to complete a dream line-up. I had lost any urge to dash off to Bennetts Lane to hear Django Bates Beloved play Charlie Parker. Another time. I wanted — wait for it — food for the soul, and this was the quartet to provide exactly that.

They began with Ellington’s The Feeling of Jazz, then Deep Night followed by a new ballad, Bernie, in honour of the late great Bernie McGann. Weeping Willow followed as a tribute to recently departed Gil Askey. There were great solos by Browne and McAll in this. In particular I loved how the quartet ended this and the previous piece, allowing them to gradually slip away. It was appropriate, I thought, to have such peaceful departures for these two characters of jazz.

From the opener, Wilson showed again that he continues to play with assurance and to draw on deep inspiration that is clearly a sustaining force. They played another new piece, Rain Man, and ended with Farewell off the album This Is Always as an encore. McAll seemed attentive rather than flamboyant on the night. He later said how much he appreciated Browne being so zen at the drum kit. This concert was good for the soul.

It was the perfect ending to the penultimate day of MIJF 2014. Roger Mitchell, Ausjazz.net

The venue is somewhat unique, a small intimate space (with a bar of course, this is Australia!) that only opens when there is a gig. On this occasion Julien Wilson was there with his trio to promote his excellent new CD “Swailing”, recently reviewed on this site. In the company of guitarist Stephen Magnusson and Steve Grant on accordion the trio mesmerised the gathered with tunes from 2007’s “Trio Live” and a sizeable chunk of the aforementioned album.

The music, with is ECM like qualities, was perfect for this space, lovely, flowing accordion flourishes, subtle guitar lines and the leader’s luscious tenor sax washing over the enthusiastic audience. The absence of a rhythm section only made this music more sensuous and inviting. Whilst Magnusson and Grant covered rhythmic duties with controlled subtly all three musicians contributed solos of eloquence and passion.

Wilson is possessed of a glorious Ben Webster like tone which he uses to great effect during his improvisational flights; he appears unable to play an ordinary solo. Likewise, Magnusson’s gorgeous tone and judicious choice of notes led to series of solos that blended in seamlessly with Grant’s accordion. On the strength of this performance I can only hope that the many demands on Wilson’s career will not mean that we have to wait another 7 years before this group reconvenes.

Fresh from a record achievement taking out three of eight categories in the 2014 National Jazz Bell Awards, Melbourne saxophonist Julien Wilson brought his unique trio to Adelaide. It wasn’t a hard-driving concert; there were no drums or bass, just tenor sax, Stephen Magnusson’s guitar and Stephen Grant on piano accordion. In this unusual combination they played a program of songs, some of quite dreamy elements, and mostly from their new album Swailing.

It was a varied collection ranging from their own compositions to jazz pieces by Ornette Coleman and Hermeto Pascoal, to a light classical piece: Massenet’s Meditation. All were skilfully interpreted at a virtuoso level of musicianship and delivered with extraordinary tonal concordance, as the lead and inspired solos were passed seamlessly between the three instruments.

A pulse wasn’t always necessary, but arrived for a dynamic version of Duke Ellington’s Creole Blues, with grooving guitar, stabbing chords and frills from the accordion, while Wilson’s tenor poured out a definitive blues using elegant high-register harmonics flowing right down to the low end of the horn. One of many highlights was a finely crafted presentation of Wilson’s signature tune Rebellious Bird with its memorable melody line of aching beauty.

There is no ego content in this trio. Each player is equally supportive and contributing importantly to a sublime performance.